As the year comes to an end, the transition of Fall to Winter sparks the season of reflection, recognition, and acceptance.  A much need moment to reflect on what will not be joining me for the new year.  2017 shook me to my core.  This year I was forced to step back, live through the events and process all the details.  Several situations impacted my life simultaneously and they all required my immediate attention. There was no pause button or suitable alternative but to experience it head on. Sometimes we avoid dealing with a situation which just prolongs the whole issue.  I admit I am guilty of this but have been working to eradicate this bad habit out of my life because procrastination just delays the whole healing process.

I have taken strides to work on these issues so I hope that by sharing my experience you will feel encouraged to live through those difficult situations.  The most difficult ones typically catch you off guard and hit you when you are least expecting them.  Realistically, it is still hard to actually prepare for situations even when you know they are headed your way.  I have learned that it’s important to recognize the progress being made, regardless of how small it may be, for each step you take is leading you through it.  Remember to be kind to yourself above all else during those tough seasons.

It is no surprise that I have been MIA from the blog and social media for several weeks to concentrate on my life instead of living in denial.  This brief sabbatical was imperative to my mental, emotional and physical wellbeing.  Creativity halted to a complete stop and I had to succumb to it the reality of it all. Currently, I’m still processing a lot of emotions but I’ve recognized that facing them head-on is the best way to go.

Here I was enjoying a delicious gelato in the beautiful town of Taormina when we heard about Hurricane Irma.  A routine call to my family in Puerto Rico totally blindsided me.  Living the life, cruising through the Mediterranean on my highly anticipated dream vacay only to hear that Puerto Rico was going to be hit with the devastating hurricane was by far a reality check.  Needless to say, I was not able to obtain much information back on the ship so I just had to wait it out.  The beauty of a cruise is that you are disconnected from the world but could also be a burden.  The only source of news was through cable but they focused on Florida and dedicated the bare minimum to Puerto Rico.  Over and over, they transmitted from a hardware store or supermarket to show folks purchasing last minute supplies in Florida neglecting to actually cover the Caribbean which would experience the magnitude of Hurricane Irma before it hit the US.

Thankfully, our families were ok and only experienced minor damage but the rest of Puerto Rico suffered loss and destruction.  Finally, a breath of relief allowed me to enjoy the rest of my vacation and experience the beauty of Spain where I fell head over heels with Barcelona.  A mesmerizing city, whose vibrant art scene and majestic architecture captivated my attention to detail until it was time to head back the US where we were met again with heartbreaking news.  Another hurricane was headed to Puerto Rico and she was going to be devastating. Maria was going to finish what Irma had started.

Even though I currently reside in the US, my heart will always live in PR. There is no way to describe the plethora of emotions I have experienced along with the rest of my fellow Puerto Ricans that live abroad.  They range on the different sides of the spectrum and in between.  The utter feeling of impotence and despair overwhelmed me.  The emotional rollercoaster of the waiting game for Hurricane Maria to hit the island shook me to my core.  Knowing that Puerto Rico would face head on a massive hurricane that was bigger than the island itself was crippling. Stuck in a vicious loop of praying, surfing the web for updates, listening to local radio, and stress eating.  I was glued to my computer and could not stop checking in with my family and friends on and outside of Puerto Rico. The worst part of all was once the hurricane had exited Puerto Rico for there was no way to reach my family and friends to make sure they were ok.  Maria knocked down all of the telecommunications antennas so there was no way to communicate with anyone on the island and they could not even reach each other.  This was the struggle all the Puerto Ricans who live abroad had to deal with.  We comforted each other as best we could when the initial images of the destruction seeped their way out through social media and the news because the last thing we could lose was hope.

I am one of the lucky ones to have had contact with my family early on but it is definitely difficult to know the people in Puerto Rico are experiencing hardship on a daily basis.  The simple things we take for granted and don’t think twice about have become luxuries on an island.  Running water, electricity, gasoline, a home cooked meal, reliable cell reception or easy access to medical care are just some of the things that we don’t give a second thought to. Hurricane Maria was by far the worst hurricane Puerto Rico has endured in almost a century.  Millions of people were left without running water, electricity and the ability to communicate within or without the island.  Transportation was greatly hindered because of the collapsed bridges, flooded roads and limited availability of fuel.  The simple luxuries we take for granted carry immense repercussions when you get down to basics.  Industries were practically taken back to the dark ages and it will take years to rebuild them.  The coffee industry is one of the ones that hit me the hardest because my favorite coffee is produced in Puerto Rico.

This situation has prompted conversations that were long overdue.  It has educated the world on the plight of Puerto Rico where a territory of the US is being treated as second-class citizens.  Where in spite of bearing US citizenship, paying taxes and contributing to the US they are forgotten and treated unfairly.   The federal government has taken this humanitarian crisis lightly.  They knew it was coming yet nothing was done to prepare.  The greatest advantage of a hurricane, a storm like this is that you can track its path, prepare, build projections.  Still, help was not available readily.  A contingency plan was not put into place.  I am well aware that PR is an island (shocker) which presents logistical differences (clearly) but a plan should have been put into place.  The inefficiency of the federal government, economic burdens, and shackles placed on the local government and the financial crisis have caused a mass exodus.  Many have chosen to survive elsewhere because that is the only option they have.  The number of jobs lost, families that have migrated to the US, students relocating to continue their education is alarming.

Today, the suffering continues to drag on.  Over half of the population still has no electricity, running water is limited and far from being clean while basic items are scarce. Most of my family does not have electricity right now and the power lines that have been restored are experiencing intermittent service. The power lines are not able to sustain the burden of a collapsed infrastructure that is slowly being repaired and rebuilt at the same time. The ability to get around the island is a challenge considering the heavy amounts of traffic due to limited electricity on the roads.  Prices have skyrocketed which has made it more difficult to obtain basic items and for businesses to operate at a normal capacity.  The anguish felt by those unable to get around amidst the devastation is something I am not able to comprehend but I assure you the impotence I have struggled with has consumed me.

The view was breathtaking from up here.

Through it, all the people of Puerto Rico have been resilient and resourceful. They have stuck together to help each other get by.  In spite of the difficult times, many have risen to the challenge of helping each other with whatever they have available to them.  The hospitable and giving nature of Puerto Ricans has shined throughout this ordeal.  A kind word, a helping hand and a smile are just some of the qualities that distinguish my fellow boricuas in and out of the island.  I am proud to have been born in Puerto Rico and have never been more grateful to belong to such a beautiful island that will always shine on in the face of adversity.

In life, we are also faced with difficult times but just know that they too shall pass. You have to see it through and know that you are strong enough to weather the storm.  Hold on because the sun will shine after the storm. 2018 I am ready for you!  Bring it on. 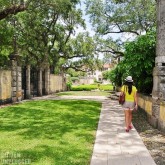